Communities in the north east Scarborough and south east Markham face significant challenges in advocating for themselves and accessing vital public services, especially the vital services and recreational facilities that could be accessed in a community centre. Even a cursory glance at the maps of community centres run by the City of Toronto and social services in Scarborough reveal a marked lack of those vital services in the target area (Fig. 4 and 5). Scarborough has been identified as the area of Toronto with the highest number of working poor in the GTA, with northern Scarborough showing high numbers of people who speak neither English nor French. The lack of public housing has also led to a significant portion of its residents living in rooming situations, renting space in houses. 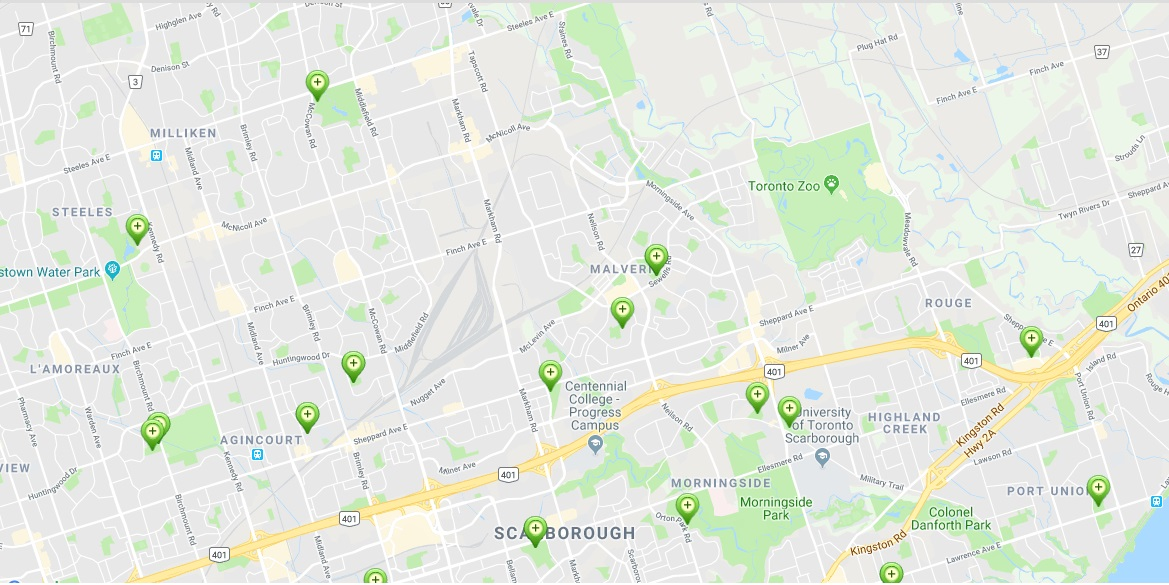 At a community event in October this year United Way revealed a survey conducted in south Markham, which showed unmet needs parallel to those revealed in the north east Scarborough area: a difficulty finding accessible and affordable community spaces, a lack of availability and affordability of services, a need for cultural competency and knowledge in service providers in the areas of mental health and wellness, a lack of language resources and translation services to help navigate the newcomer system, and a high incidence of work precarity and lack of opportunity for progress in work. These are clearly needs of a vulnerable community, and mirror those of their immediate neighbours; needs which could be addressed through programming at the TCC.

Three significant challenges can be identified at the outset facing Scarborough residents: their income after shelter costs is significantly lower than those living in public housing, they face longer commute times to access work and services, and they lack the means to identify their needs in a data driven process. These challenges lead to a greater social exclusion and poor quality of life. Longer commute times mean residents face barriers to socio-economic mobility, as they have less time to spend on professional development. Their well-being suffers, as they are also less likely to access health services, less likely to vote and have less time to spend with their families and communities. The lack of representation of their poverty or their needs in the data that supports the creation of Neighborhood Improvement Areas leaves them stranded in a socioeconomic bald spot (Fig. 5). 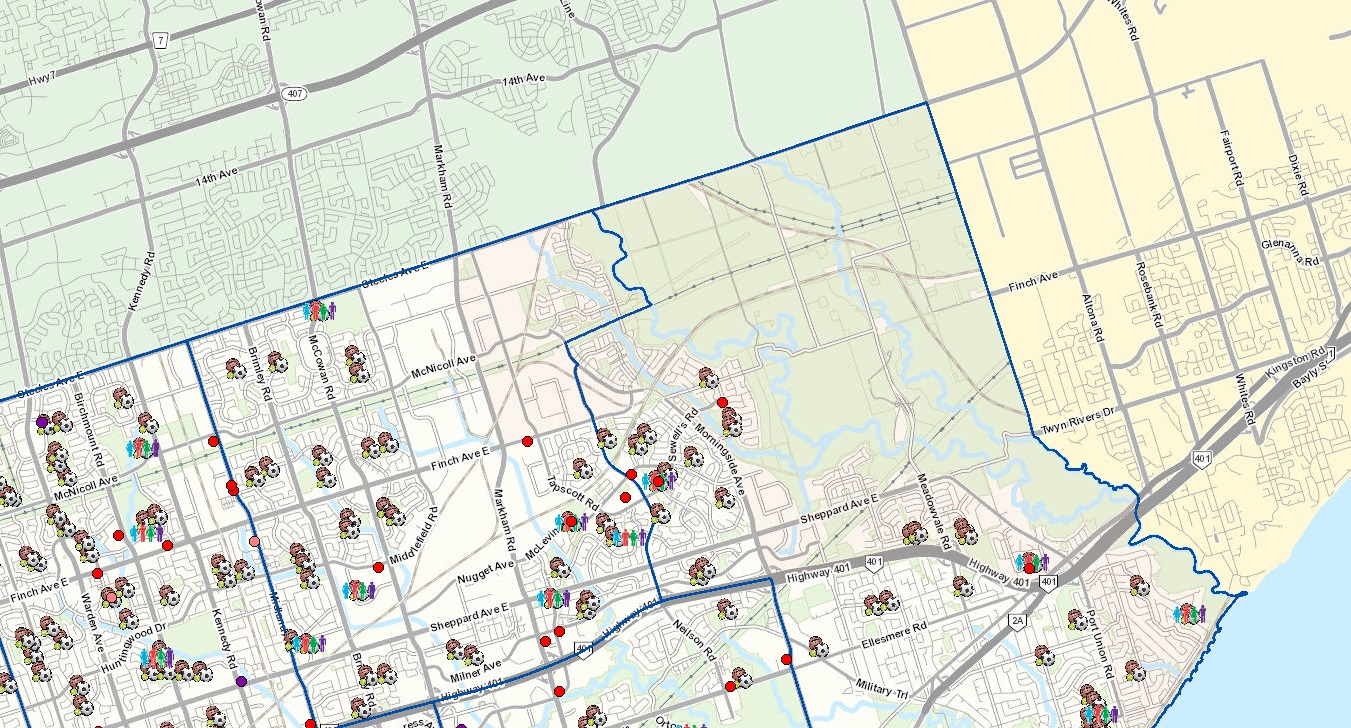 The TCC project attempts to create a multi-purpose space where services could be streamlined to one significant bald spot. It is driven by data gathered through an online consultation tool, and through meetings with neighbourhood and community organizations that are aware of the challenges faced on the ground by the residents of north east Scarborough, while being alert to the possibility of these services being accessed by communities in south Markham and Pickering. The accumulation of data from neighbourhoods in north east Scarborough whose poverty and needs are underrepresented in the analytical data that drives the creation of Neighborhood Improvement Areas is crucial to this project (Figs. 6 and 7). 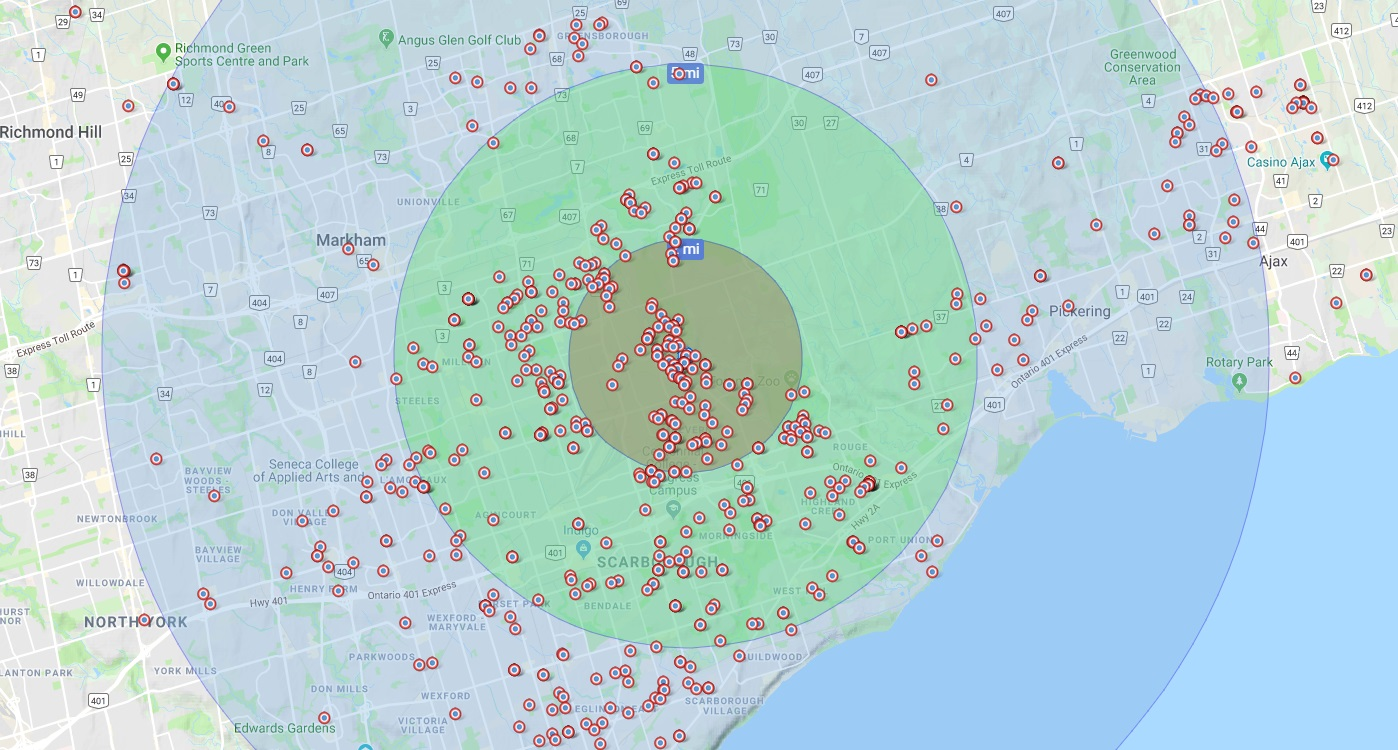 The consultation process is ongoing to further refine programming when the TCC is constructed. While the project is being mobilized by the Tamil community, it is carried out with sensitivity to the needs faced by other vulnerable and marginalized communities in the area. This includes Caribbean and Indigenous communities who face a similar dearth of resources, and the threat of social exclusion.

Within these communities, LGBTQ members, differently abled members, those suffering from mental health issues, and survivors of domestic abuse are made even more vulnerable when they lack resources and programming. Having gender neutral washrooms in the TCC, and the use of surtitle machines in the auditorium will allow for greater accessibility, along with standards of wheelchair accessibility. It is clear that a community centre in this part of north east Scarborough would improve the quality of life for all its residents through providing much needed recreational space and programming. Based on the needs identified thus far (Fig. 8), priorities for programming include but are not limited to; mental health services, women’s services, LGBTQ community inclusion and high physical accessibility standards. 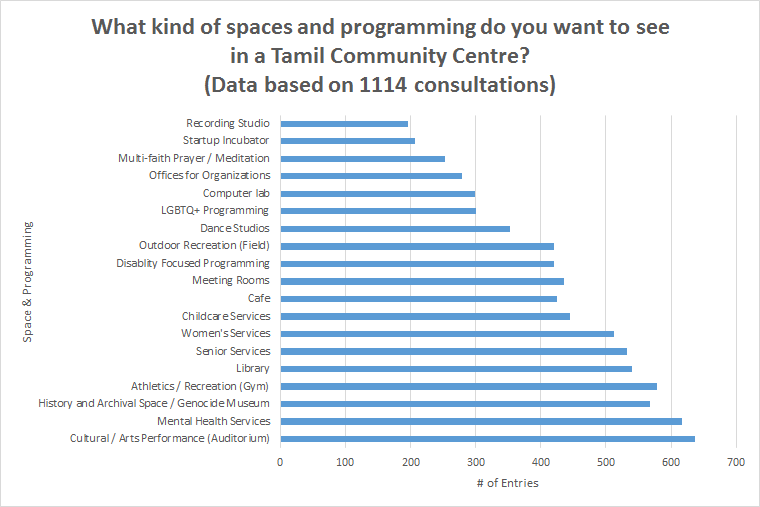