Canadian Tamils have proudly called Canada home since 1960, coming from various parts of South and East Asia, including Sri Lanka, India, Singapore and Malaysia, with their numbers dramatically growing between the late 80s and early 2000s due to the civil war in Sri Lanka. The 90s saw Tamils as the largest growing visible minority group in Canada, and the 2016 census showed Canada to be home to the largest Tamil diaspora outside of South Asia, with a population of 240,851 reporting to be of Tamil descent, heritage and/or culture, of whom 80% currently reside in the GTA. While a large number of these Tamils arrived here as political refugees, they have defied expectations as a refugee population, producing internationally recognized artists and academics, as well as successful students, business people and politicians.

In 2016, January was unanimously declared as Tamil Heritage Month in the House of Commons in recognition of the immense contributions Tamils have made to Canadian society, and of the importance of acknowledging the rich Tamil language and heritage, and their continued preservation through education. Yet, Canadian Tamils remain an underserved community in the GTA. The later waves of refugees arriving in Canada struggled to access services and encountered significant barriers to their progress, including language and the lack of programming spaces.

For close to a decade the community has been making moves toward the creation of a community centre to address the gap in services available to them. Those efforts are culminating in the present project to create a Tamil Community Centre in north east Scarborough to streamline services to the community and the neighbourhoods they inhabit, while also incorporating the needs of the mainstream community that would be able to access and use this facility.

City of Toronto maps based on data gathered in the 2016 census show a high concentration of Tamils reside in the north east of Scarborough (Fig.1), the area targeted for the TCC. As we zoom outwards from the City of Toronto and observe the GTA and its environs, census maps identify a heavy concentration of Tamils in the southeast area of Markham (Fig. 2) and between Pickering and Ajax just east of north east Scarborough (Fig. 3). 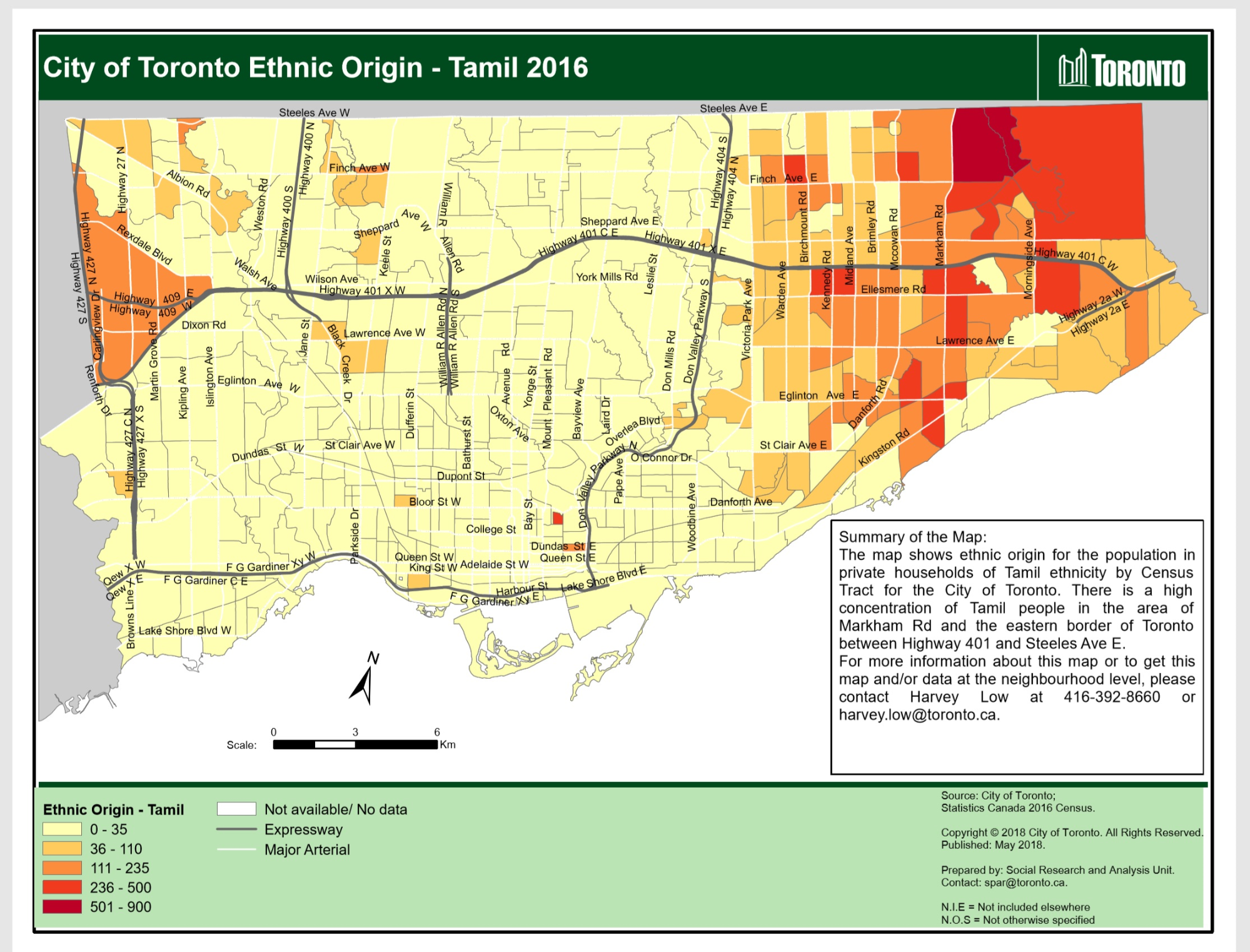 Tamils traditionally hold strong kinship values, and tend to maintain ancestral village links through village associations that now hold a transnational quality. The village associations have acted as newcomer resources through the past several decades, providing support, and vouching for newcomers who hail from their villages in India and Sri Lanka. This would go some way toward explaining the high density populations in parts of Scarborough, Markham and Pickering. As these communities grow and flourish, it is to be expected that the density of the population served by the projected TCC would grow incrementally. The proposed north east Scarborough location would also ideally serve communities within transit and driving distances from these adjoining areas. 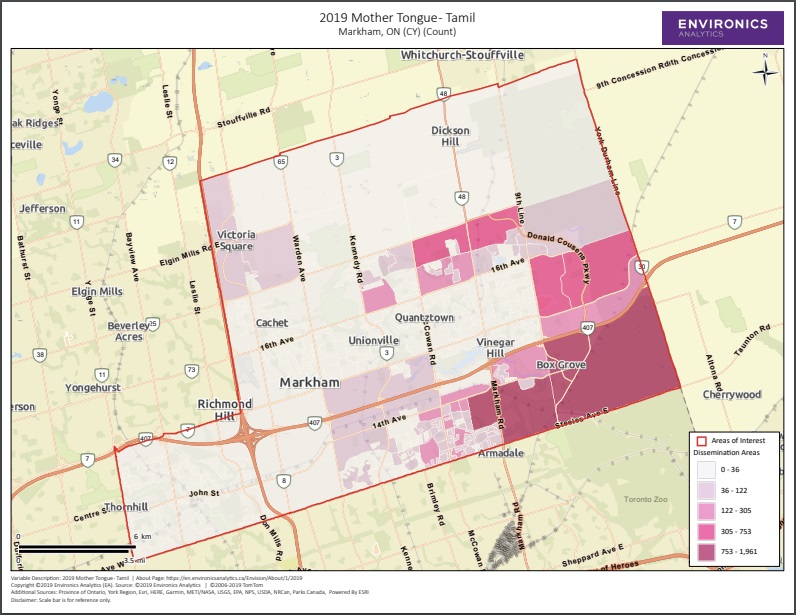 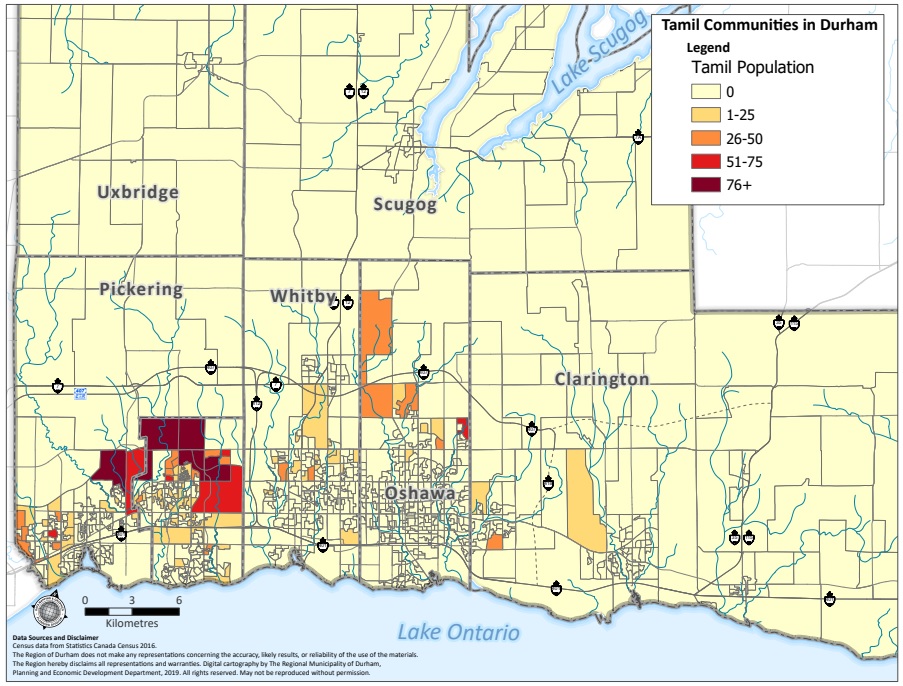 A community town hall was held on March 2019, that was supported by representatives from municipal, provincial and federal governments, diverse community members, and a variety of organizations designed to serve community needs. An organic and in-depth conversation on the needs and problems faced by the community were raised at the grassroots event. This process revealed the need for a more flexible approach to planning and using public spaces for community services to address existing service gaps in both the geographical area of north east Scarborough and among this demographic.

A Steering Committee was created by the Canadian Tamil community, building on more than a decade of foundational work done by long-standing community organizations and business leaders, to oversee the feasibility process for the design, construction and operation of a Tamil Community Centre (TCC). The intergenerational steering committee consists of community members with longstanding service to the community in the areas of culture, philanthropy, arts, business, activism, academia and community capacity building.

Evolving from the hopes expressed by community members present at the town hall, as well as a subsequent consultation process, it is intended that the TCC be a dynamic, innovative, multi-purpose, and non-denominational facility incorporating spaces and services to help address the current and growing needs of the diverse Canadian Tamil community by acting as a community hub. The centre will offer recreation facilities in the form of a gym and outdoor playing fields, cultural facilities in the form of a library, museum and auditorium, and multi-purpose spaces that can facilitate community hubs through educational and networking programming.

While the GTA has a population of 122,000 Tamils, the Community Centre could potentially serve between 500-900 Tamil households in the Scarborough area (2016 Census), 236-500 Tamil households in the Durham area, and 750-1961 Tamil individuals in the South Markham area (according to 2019 Census data). Around 122,000 Tamils who live in the GTA (2016 Census) would be able to access the TCC for culturally specific events held in the auditorium, and participate in community athletic events in the outdoor playground.

Through this multi-purpose space, the TCC would facilitate service integration in a transit accessible site, promoting strong, liveable, healthy, socially cohesive and resilient communities by improving their access to parklands, recreational facilities, cultural events and public services related to health, safety and well being. The TCC would also function as an accessible site for municipal policy makers and their community partners to accumulate data in neighbourhoods that are currently unable to provide analytical data to address their health, education and labour market needs.

Municipal and provincial policymakers and their community partners would thereby be able to streamline services and address health, poverty and civic exclusion for a number of marginalized and vulnerable community members. These factors combined would facilitate greater social inclusion for vulnerable communities that have been underserved in the GTA for too long, with a reach in municipalities that include Toronto, Markham, Pickering and Ajax.